A couple weeks ago I read “The Paris Wife” by Paula McLain, which is a historical fiction novel set in Paris during the 1920s about Ernest Hemingway’s marriage to his first wife, Hadley. To tell you the truth, I mainly picked “The Paris Wife” up because I love reading about artists and writers and I was aware that Hemingway was a good friend of F. Scott Fitzgerald, another literary giant who I have loved ever since reading “The Great Gatsby.” I knew nothing about Hemingway, other than he was this huge literary presence who readers either seemed to love or hate.

I finished “The Paris Wife” in a mere number of days. I was completely entranced by the atmosphere and climate of post-war Paris. The scandal, the passion, and, most importantly, the tragic love affair of Ernest and Hadley Hemingway. I was eager to learn more about the couple’s relationship and their time in Paris so I dove straight into “A Moveable Feast,” which is Hemingway’s own account of the same time period. (Side note: if you do not know anything about Hemingway, his wife Hadley, or 1920s Paris, then I highly recommend you read “A Paris Wife” before picking up “A Moveable Feast” because it more fully explains a lot of the events Hemingway writes about in his account.) 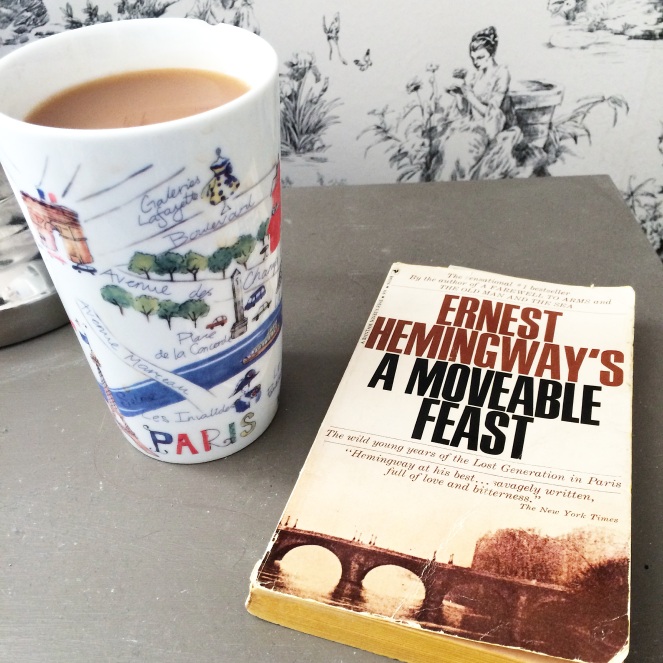 You belong to me and all Paris belongs to me and I belong to this notebook and this pencil.

“A Moveable Feast” chronicles Hemingway’s adventures in Paris with his first wife Hadley and the set of writer and artist expatriates living in the City of Lights from 1921-1926. In a way, this is a memoir of Hemingway before he was really Hemingway. He was struggling writer, yet to make his splash in the literary world, and having a hard time earning enough money to put clothes on his back and feed his family. Among many other things, young Hemingway has his work edited by Gertrude Stein, is given advice by poet Ezra Pound, and goes drinking with Zelda and F. Scott Fitzgerald. This is certainly one to read if you’re a fan of artists or writers during the 1920s, as Hemingway does his fair share of name dropping in this book.

Rather than a chronological sequence of events, “A Moveable Feast” is more a book of separate essays all about the same time period. Each chapter is a different essay, and each essay covers a different notable event. For example, one essay talks about Syliva Beach’s renowned bookstore Shakespeare and Company, while in another Hemingway recounts the first time he met F. Scott Fitzgerald. The essays do not really interlock, and you could quite easily dip in and out of this book, reading one essay here and another there when you have time. I do recommend, however, that the first time you read this book that you read all the essays in chronological order.

You may be thinking, “What are you talking about Shannon? You just told us this book is Hemingway’s memoirs from a real period in his life, how could that be anything but non-fiction?” and of course, your point would be extremely valid. However, in typical mysterious Hemingway fashion, the novel opens with a preface from the author stating the following: “If the reader prefers, this book may be regarded as fiction. But there is always the chance that such a book of fiction may throw some light on what has been written as fact.”

So, is it fiction or is it non-fiction? Did the events Hemingway writes about in this book really happen, or did he make them all up? Perhaps Hemingway included this quote in the preface in case there were any wrong facts in the book and anyone tried to confront him about it. After all, he was writing about events that happened forty years ago, surely some things were bound to be a bit foggy in his mind. Perhaps he included this quote to try and push the boundaries of what people consider as non-fiction, which is generally regarded as a rather dull genre compared to fiction. Perhaps Hemingway just wanted to add an air of mystery to his book. We may never know what Hemingway’s true intention was with “A Moveable Feast,” whether it was meant as fiction or fact, but I think the guessing game along the way only heightens the experience of reading this book.

One of the most interesting facts about this book, and the thing that really made me want to pick it up, is that Hemingway wrote this book at the end of his literary career. Apparently spurred by the rediscovery of some of his old notebooks from his time in Paris, Hemingway decided to dive into his past. He was already a huge sensation, both in the literary world and popular culture. He had won the Nobel Peace Prize, written a dozen books and sold thousands of copies of them, and had established a reputation as one of the greatest American writers not just of his generation but of all time. He was tall, handsome, on his fourth wife, and well-known for his love of bull fighting, boxing, and African big game hunting. So why did he choose, in his last years of life, to write about a time in his life before he was famous, with a wife he had divorced years ago? Maybe all his fame had become too much for him and he longed for a time when he could walk down the street and no one would recognize him. Perhaps he missed the simplicity of life with Hadley and son Bumby. Maybe it was a simple desire to be young again and cured of all the ailments that plagued him in later life. Even more tragic, perhaps, is that before Hemingway could publish his memoirs of a long forgotten Paris, he took a shotgun to his head and ended his life. Perhaps this is a lesson to us, a lesson that Hemingway’s friend Fitzgerald tried telling us many years ago with his famous character Gatsby: no matter how hard you try, you can’t relive the past.

But Paris was a very old city and we were young and nothing was simple there, not even poverty, nor sudden money, nor the moonlight, nor right and wrong nor the breathing of someone who lay beside you in the moonlight.

This book really made a big emotional impact on me, and I could go on about it for days. For the sake of not making this post inordinately long, I think will make further posts specifically dealing with the dissolution of Hemingway’s marriage with Hadley and the controversy behind the new 2009 edition of “A Moveable Feast,” both fascinating subjects that are much too involved to discuss here. Truly, I loved this book. There were some chapters that were a bit above me, such as one chapter where Hemingway discusses French bicycle racing, however overall I was completely absorbed by this book. Hemingway’s writing style is so raw; he has this incredible gift of getting to the point right away, without any fluffy descriptions or long paragraphs, yet still managing to be utterly poetic. I feel as if I have sat in coffee shops and discussed the merits of modern literature with Ford Maddox Ford, and met Picasso at one of Gertrude Stein’s famous salons. I feel so personally invested in each of these people, who lived and died before I was born, and this ability of literature to transport us back to times long ago is one of the reasons why I love reading in the first place. Below I have included a gallery of photos of Hemingway, Hadley, and some of their literary friends down below. I hope they all become as real for you as they have for me. 🙂

3 thoughts on “The Hemingway Files: A Moveable Feast”

© Shannon Burton and Reflections of a Reader, 2016. Unauthorized use and/or duplication of this material without express and written permission from this blog’s author and/or owner is strictly prohibited. Excerpts and links may be used, provided that full and clear credit is given to Shannon Burton and Reflections of a Reader with appropriate and specific direction to the original content.
%d bloggers like this:
%d bloggers like this: