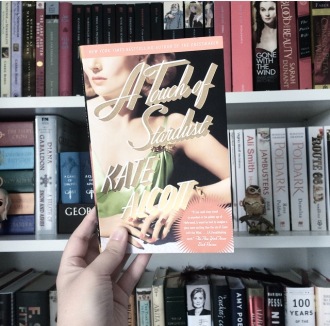 Title: A Touch of Stardust

Summary (from back of book): Julie Crawford left Fort Wayne, Indiana, with dreams of being a Hollywood screenwriter. Unfortunately, her new life is off to a rocky start. When she is fired by the notoriously demanding director of Gone with the Wind, she’s lucky to be rescued by Carole Lombard, whose scandalous affair with the still-married Clark Gable is just heating up. As Carole’s assistant, Julie suddenly has a front-row seat to two of the world’s greatest love affairs. And while Rhett and Scarlett – and Lombard and Gable – make movie history, Julie is caught up in a whirlwind of outsized personalities and overheated behind-the-scenes drama…not to mention a budding romance of her own.

‘Movies teach us how to do that,’ Carole had confided. ‘Create a set, sprinkle a touch of stardust. Who gives a shit if it’s real? Just make it good enough to believe.’

Like many other readers, one of my goals for 2016 was to finally read Gone with the Wind by Margaret Mitchell, a sheer beast of a book and Civil War historical epic. Though it took me over a month to read, I did complete this goal and finished GWTW back in March. I was utterly captivated by the story, the writing, and the world of Rhett and Scarlett, and ever since March I have been hungrily searching for everything GWTW-related that I can get my hands on. So, you can well imagine my delight when I stumbled across A Touch of Stardust, a historical fiction novel that takes place on the set of GWTW, sitting on a table at my local Barnes and Noble. This book promised glamour, romance, and an insider’s look at one of my favorite movies: my hopes were very, very high.

A bit along the lines of Call Me Zelda by Erika Robuck, A Touch of Stardust focuses on fictional characters who interact with very real, very famous individuals. In Call Me Zelda, those very real, very famous individuals are Zelda and F. Scott Fitzgerald, while in A Touch of Stardust they are Carole Lombard, Clark Gable, and the rest of the cast and crew of GWTW. Our main protagonist is a young woman named Julie Crawford, who has left her privileged, conservative life back home in Fort Wayne, Indiana to pursue her dreams of becoming a Hollywood screenwriter. I really liked this particular characterization of Julie, as it was nice to see a main female character aspire to  be a writer and not the leading lady for a change. The other main fictional character in A Touch of Stardust is Andy Weinstein, an assistant producer on GWTW and right-hand man to the film’s perfectionist of a producer, David O. Selznick. Andy saves Julie after Selznick fires her at the beginning of the book by getting her a job with actress Carole Lombard, and Andy is almost instantly cast as Julie’s on-again, off-again love interest throughout the course of the novel.

Although the real historical parts of this book probably had the most potential to go wrong, ironically enough I had the most issues with the fictional parts. For one, I never really felt like I connected to Julie as a character. While she had potential, and I certainly admired her dreams of becoming a screenwriter, I felt she was under-developed as a character and, because of this, I never became personally involved in her story line. When you fail to understand the basic premise of a character, especially the main character, you fail to understand what motivates that character or why they make certain decisions. When you are unable to understand a character’s decisions, you fail to sympathize with them and gradually start to lose interest in them as a whole. This is what happened for me with Julie. I wanted to root for Julie in her pursuits to take down the male-dominated field of Hollywood screenwriting. I wanted to be excited when she finally stuck it to her controlling, overprotective parents. I wanted to jump up and cheer at the end of the novel when she is finally given her big break in the move business. Instead, all I was left feeling was rather flat and unaffected.

If I had issues with Julie as a character, I had even more issues with her relationship with Andy. Now, Andy as a character had enormous potential in this novel: not only was he the right hand man of the brain behind GWTW but he was also Jewish, which put him in some tricky situations as WWII loomed ever closer and closer in the background. Likewise, the relationship between Andy and Julie also had a lot of potential: young girl meets older, experienced Hollywood producer, and her extremely conservative parents would never approve of her relationship with someone Jewish. This could have been an interesting, complex relationship, however it just ended up being a bit bland and shallow. I didn’t hate it, it was just a bit boring.

Like Call Me Zelda, in my opinion the saving grace of A Touch of Stardust was the real-life historical setting and the real people who were cast as supporting characters. Kate Alcott (whose real name is Patricia O’Brien) was married to the late Frank Mankiewicz, who was part of a legendary film family, and so believe me when I say that the lady knows what she’s talking about when it comes to Classic Hollywood. If you are at all a fan of classic films or how movies are made then I highly, highly recommend you read this book as there are some really interesting tidbits about the casting, scenery, writing, directing, costuming, filming, and editing of GWTW. This book is also filled with lots of trivia any GWTW movie buff is sure to love, such as how Leslie Howard felt he was too old to play Ashley Wilkes and how Clark Gable almost boycotted the premiere of the film in Atlanta because of segregation issues.

There were lots of classic celebrities who were brought to life in this novel – Clark Gable, Vivien Leigh, Leslie Howard,Olivia de Havilland – however, my favorite from the bunch is one I knew virtually nothing about before starting this book: Carole Lombard. As I mentioned earlier in this review, Andy saves Julie’s career when she is fired by getting her a job with Lombard as her personal assistant, however the relationship between Lombard and Julie quickly evolves into a very close friendship. Whatever Julie lacks in depth, Lombard more than makes up for. She’s quirky, she’s funny, she’s straight-talking, she won’t take any nonsense, and she’s not afraid of anybody, but perhaps more than anything, she’s a real human being just like anybody else. I think that’s what Alcott does best in this book: take untouchable movie stars like Clark Gable and Carole Lombard and humanize them. I felt more connected in this book to Carole Lombard, a movie star, than I did to Julie Crawford, a regular girl from Indiana. And, to be sure, the relationship between Gable and Lombard is far from boring or shallow.

So, did I love this book? Not quite as much as I was hoping I would. The parts of the book that focused on the real-life cast of GWTW and the relationship between Clark Gable and Carole Lombard were, by a long-shot, my favorite parts and the reason I kept reading this book. Unfortunately the fictional aspect of A Touch of Stardust is where this story fell flat for me, however I think if this book had been developed a bit more (perhaps another 100 pages) this could have been taken care of. I rated this book 3/5 stars on Goodreads, and if you are a  fan of GWTW or Classic Hollywood I definitely recommend this novel. It was an enjoyable, fast, historical read; just don’t go into it expecting anything earth shattering.

If you have read this book, please comment down below and let me know as I’d love to know what other people thought of A Touch of Stardust. Also, if you have read any other good books about Classic Hollywood (be they fiction or nonfiction), also let me know as I’m really interested in reading more about this subject. Happy reading!

5 thoughts on “Classic Hollywood Lit: A Touch of Stardust”

© Shannon Burton and Reflections of a Reader, 2016. Unauthorized use and/or duplication of this material without express and written permission from this blog’s author and/or owner is strictly prohibited. Excerpts and links may be used, provided that full and clear credit is given to Shannon Burton and Reflections of a Reader with appropriate and specific direction to the original content.
Loading Comments...
Comment
×
%d bloggers like this:
%d bloggers like this: