Summary (from inside flap): When beautiful, reckless Southern belle Zelda Sayre meets F. Scott Fitzgerald at a country club dance in 1918, she is seventeen years old and he is a young army lieutenant. Before long, Zelda has fallen for him, even though no one else believes that his writing will bring him both fortune and fame. When Scott sells his first novel, she optimistically boards a train to New York, to marry him and take the rest as it comes. What comes, here at the dawn of the Jazz Age, is unimagined success and celebrity that will make Scott and Zelda Fitzgerald legends in their own time. In New York City, Hollywood, Paris, and the French Riviera, they join the endless party of the glamorous, sometimes doomed Lost Generation that includes Ernest Hemingway, Sara and Gerald Murphy, and Gertrude Stein. Everything seems new and possible, but not even Jay Gatsby’s parties go on forever. Who is Zelda, other than the wife of a famous – sometimes infamous – husband? With brilliant insight and imagination, Therese Anne Fowler brings us Zelda’s irresistible story as she herself might have told it.

It seems that for the past couple of weeks all I’ve wanted to read is historical fiction set in the first half of the 20th century (see my review of A Touch of Stardust here), and Z has been sitting on my shelf since Christmas, so I decided that now was as good a time as any to pick it up. Z, as it says in the summary I’ve included above, is a historical fiction novel that follows the life of Zelda Fitzgerald, from her early years as belle of the ball in Montgomery, Alabama, to the endless parties of Lost Generation Paris alongside her rather famous husband, novelist F. Scott Fitzgerald. This novel is often compared to The Paris Wife by Paula McLain, which many of you may know is one of my favorite books, so I was worried going into this that it wouldn’t live up to my high expectations. I am very, very happy to say that I was wrong. This book was utterly, completely, 100 percent fantastic.

I wish I could tell everyone who thinks we’re ruined, who thinks Scott’s beyond washed-up and I’m about as sharp these days as a sack of wet mice, Look closer. Look closer and you’ll see something extraordinary, mystifying, something real and true. We have never been what we seemed.

Z, at its most basic level, is a piece of biographical fiction (a very good piece of biographical fiction, in fact). I suppose you could almost categorize Z as a piece of autobiographical fiction, if there is such a category, as we are told the story of Zelda’s life from the lips of Zelda herself. Z unfolds in 1918 where, on a June morning in Montgomery, Alabama, 17-year-old Zelda Sayre is completely oblivious to the fact that later that evening, at the Montgomery Country Club, she will meet 21-year-old Lieutenant Scott Fitzgerald and her life will never be the same again. A major part of this novel, and one that continues throughout the entire book, is Zelda’s struggle to establish an identity separate of her husband. Fowler poignantly, and rather tragically, in my opinion, illustrates Zelda’s failure to do this through the structure of the book itself: Z, a novel of Zelda’s life, begins when she meets Scott and ends when he dies of a heart attack. While I really enjoyed every aspect of this book, there are two points in particular that have stuck out in my mind, two areas that could have been disastrous if done incorrectly but that Therese Anne Fowler handles with an expert touch: the portrayal of Zelda and the complexity of her relationship with Scott.

Who was Zelda Fitzgerald?

Who was Zelda Fitzgerald? A seemingly simple question, yet Zelda remains a mystery 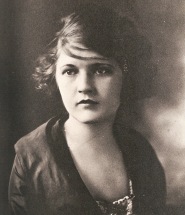 shrouded in rumor and half-truths even now, over 60 years after her death. To many Zelda was just a party girl, the It Girl of the Jazz Age who went crazy at the end of her life. To Ernest Hemingway she has gone down as the woman who dragged her husband down and distracted his genius away from his writing. She wrote a novel, Save Me the Waltz, which, although it has been gaining popularity in recent years, was almost a complete flop when it was published. But beyond these simple facts, Zelda’s life remains rather a mystery. I must admit myself that before reading Z, I didn’t know much more than the facts I’ve just described, but Therese Anne Fowler does a wonderful job  of bringing to life an incredibly unappreciated, incredibly complex woman.

Because that’s exactly what Zelda is, at the end of the day: an incredibly complex woman. More than just F. Scott Fitzgerald’s wife (and I think she would have hated to be remembered for that alone), Zelda Fitzgerald was a writer, a painter, a dancer, a mother, and a feminist. As well as a full-length novel, Zelda wrote countless other short stories and pieces of nonfiction, many of which were published under her husband’s name. She was an avid artist, learning from the best in their fields as she traveled about Europe with her husband, and even had a solo exhibition at the end of her life. She was a lover of dance, both from a viewer’s perspective and that of a dancer, and was offered the chance to perform with a professional ballet company. She was smart, witty, and almost as well-read as her husband.She was this and so much more, yet over the years these subtle details of her life have been lost to the general public. Her writings were never critically acclaimed, her paintings are rarely exhibited anymore, her potential as a dancer has been forgotten. Through the carefully-researched, carefully-written narrative structure of Z, however, Therese Anne Fowler brings Zelda back to life and returns her, in all her complexity and glory, to a generation that has neglectfully shunned her to the sidelines.

As well as a remarkable piece of biographical fiction, Z is a love story between Zelda and Scott Fitzgerald. If this book is to be believed (and I truly hope it is), deep down, behind all the rumors, all the fights, all the lies and the affairs, Zelda and Scott Fitzgerald passionately loved each other up until they took their final breaths. Be warned, however, as this is not a happy love story. If you know anything about the Fitzgeralds, you will already know that their conclusion is not a happy one: Scott dies of a heart attack at 44 and Zelda is killed in a fire a few years later. Through bouts of mental illness and alcoholism, the couple slowly tear each other apart and spend more time living separately in their final years than they do together. I already knew the Fitzgeralds had an unhappy ending, however knowing that something terrible is going to happen doesn’t make its arrival any less upsetting, and I think it’s proof of Fowler’s supreme writing and characterization in this novel that I was still rooting for Zelda and Scott to work things out even as I turned Z’s final pages.

This was Scott. This is Scott, always looking back to try to figure out how to go forward, where happiness and prosperity must surely await.

I should think creating the character of Scott must have been rather a difficult task for Therese Anne Fowler, as F. Scott Fitzgerald is one of those authors who everyone has either read or pretends to have read, and the plots of his books have become so well-known that they can be referenced in daily conversation with almost no explanation necessary. Many of his novels are often talked about as inspired by his relationship with Zelda: a lot of the dialogue in his first novel, This Side of Paradise, came from Zelda’s diary and the inspiration for Tender is the Night came while Zelda was in and out of mental institutions. In Z, however, Therese Anne Fowler focuses on a connection not often talked about, and that is the connection between Scott and his most famous novel, The Great Gatsby. Like his protagonist, Jay Gatsby, Scott spends far too much of his life focused on the past. If he publishes a book and it receives mediocre reviews and sales, he fixates on what went wrong and what people might not have liked rather than funneling his attentions into a new work. Combine this with a drinking problem and a constant state of insecurity and you get a very troubled, very difficult, very complex man. His insecurity is a major part of this novel, as it is this insecurity and his fears that Zelda will outstrip him that drive her to mental institutions at the end of her life (but I won’t say anymore, I’ll let you find out about that for yourself 🙂 ).

I’ll try and wrap this review up quite quickly, as I’ve rambled on for much longer than I originally intended to, but if you haven’t figured it out by now, I absolutely loved this book. For the last week or two I feel as if I have left my ordinary life behind and immersed myself in the world of Zelda and Scott. Z was one of those rare books where you feel that you’ve become those characters for the short period of time in which you’re reading, and now that I’ve turned the final pages I truly feel as though I’m mourning the loss of two dear friends. This book is far, far more than a simple piece of biographical fiction. It’s a book about feminism, about mental illness, about alcoholism and tragedy and what happens when two people simply love each other too much. It’s about ambition and greed, adventure and recklessness, art and family. It’s about the things that bring us together, as well as the things that push us apart. It’s about looking to the future, but also about knowing when to leave the past behind, and I truly believe there’s a little something for everyone in it. 🙂