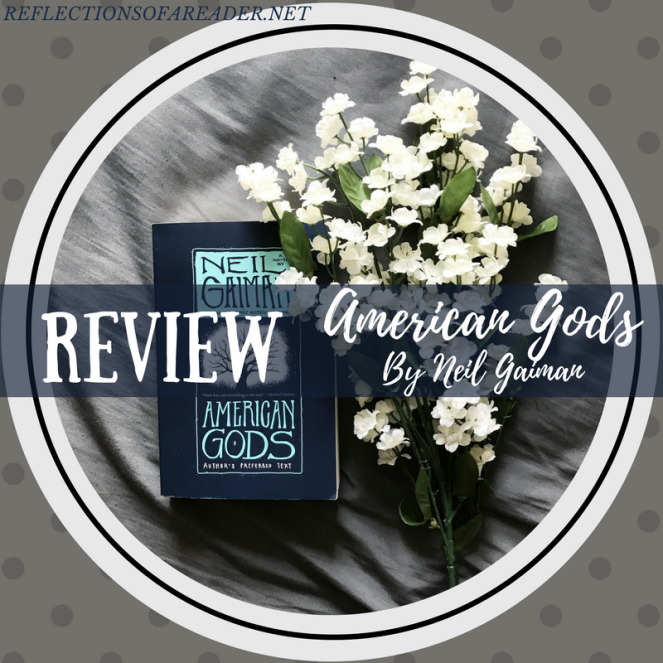 Summary (from back cover): Locked behind bars for three years, Shadow did his time, quietly waiting for the magic day when he could return to Eagle Point, Indiana. A man no longer scared of what tomorrow might bring, all he wanted was to be with Laura, the wife he deeply loved, and start a new life. But just days before his release, Laura and Shadow’s best friend are killed in an accident. With his life in pieces and nothing to keep him tethered, Shadow accepts a job from a beguiling stranger he meets on the way home, an enigmatic man who calls himself Mr. Wednesday. A trickster and a rogue, Wednesday seems to know more about Shadow than Shadow does himself. Life as Wednesday’s bodyguard, driver, and errand boy is far more interesting and dangerous than Shadow ever imagined – it is a job that takes him on a dark and strange road trip and introduces him to a host of eccentric characters whose fates are mysteriously intertwined with his own.

American Gods is one of those books that I can’t stop talking about but can’t seem to bring myself to review. I’ve been done with this book for almost a week now, and I’ve set it on my desk with the sole intention of sitting down and reviewing it, yet I can’t seem to bring myself to actually write about it. This isn’t because it’s a bad book – make no mistake, I completely and utterly loved this book.  Maybe it is because I loved it so entirely that I’m not sure how to put my feelings about it into words. I suppose I’ll try anyways; after all, is that not the purpose of this blog?

I’ve had American Gods sitting on my bookshelf now for at least a year, and up until about a week ago I didn’t really have any desire to pick it up. The premise sounded vaguely interesting (although slightly confusing, if I’m being completely honest with you), but I mainly bought it because everyone I knew raved about Neil Gaiman and American Gods seemed to me like the title that got thrown around the most. I picked it up one afternoon at Barnes and Noble, read the first couple of pages and loved them, and then left it to gather dust on my bookshelf for far too long. The thing is, I knew Neil Gaiman would be one of those authors I would love if I just picked him up, but I never felt motivated to get into one of his novels. And, at over 500 pages, American Gods is rather an intimidating entry point into Gaiman’s bibliography.

But I digress. As I’m sure many of you will already know, American Gods has been adapted into a TV series and is currently being shown on STARZ. About two weeks ago, my dad watched the first episode and told me the following: “Shannon, I’ve just watched the weirdest program – there were Vikings and a guy fought a leprechaun, and I’m pretty sure one of the characters was a Norse god. It was definitely one of the strangest things I’ve ever watched.” If my interest in American Gods wasn’t piqued before, it absolutely was now. Suffice it to say that I picked the book up that night (at the expense of A Gentleman in Moscow by Amor Towles, might I add, which still sits on my nightstand unfinished) and had finished it within a week. And I completely loved every witty, wacky moment of it.

“None of this can actually be happening. If it makes you more comfortable, you could simply think of it as metaphor. Religions are, by definition, metaphors, after all: God is a dream, a hope, a woman, an ironist, a father, a city, a house of many rooms, a watchmaker who left his prize chronometer in the desert, someone who loves you – even, perhaps, against all evidence, a celestial being whose only interest is to make sure your football team, army, business, or marriage thrives, prospers and triumphs against all opposition.”

I don’t want to summarize the book too much, as I personally think the best way to enjoy American Gods is to go in with very few expectations and assumptions and get swept away by the story line (at least, that’s what I did). As mentioned in the blurb I gave above, the novel’s main character is a man named Shadow, who is days away from being released from prison when he finds out his best friend and wife have been killed in a car accident. On his way home to attend his wife’s funeral in Eagle Point, Indiana, Shadow meets a mysterious and blunt individual by the name of Mr. Wednesday, who offers him a job as his bodyguard. If you’ve heard American Gods described as a sort of “road trip novel,” it’s because for a lot of the book Shadow and Mr. Wednesday are driving about the US, encountering along the way some of the most unusual characters I’ve ever read about (also, the roadside attractions Gaiman mentions in this book sound incredible and I want to visit them all).

Beyond the literal action of the plot, however, American Gods rests upon a far more interesting ideological premise: when immigrants and other foreigners, from Europe and Africa and all over the world, come to America, what happens to the respective gods and religious beings in which they believe? These newcomers continue to worship these gods when they first come to America, but gradually, as time passes and new generations succeed their elders, these settlers are assimilated into American culture and the beliefs of their homelands are forgotten. I won’t tell you much more than that, because as I said earlier I think you should go into this book without knowing everything, but think of American Gods as a more adult, more culturally-diverse version of Rick Riordan’s Percy Jackson series.

American Gods was quite unlike any book I had ever read before, and I completely and utterly loved it. It’s a rather hefty tome, that must be acknowledged, but I tore through it at a furious pace. The characters are wacky, the writing is witty and extremely funny (something I wasn’t necessarily expecting going in), and the plot will have you entranced up until the very last page. Thanks to American Gods I’ve rediscovered my love of fantasy fiction, or at least fiction with very fantastical elements, as well as a complete adoration for the writing of Neil Gaiman (seriously, the man is a genius, I don’t know how I’ve gone this long without picking up any of his books!). If you’re looking to pick up something different, a bit wacky but completely wonderful, or if you’re just looking for some very clever writing (and I promise you, Neil Gaiman is very clever indeed), I can’t recommend American Gods enough. I’ve been in a bit of a reading slump lately, but this completely captivated me. And, while you’re at it, go ahead and check out the STARZ TV series as well – I’ve only seen the first couple of episodes, but so far it’s surprisingly faithful to the novel and is shaping up to be a really great piece of television.

Have you read American Gods? Which Neil Gaiman book would you recommend I try next? Let me know down in the comments. Until next time, lovely readers. 🙂