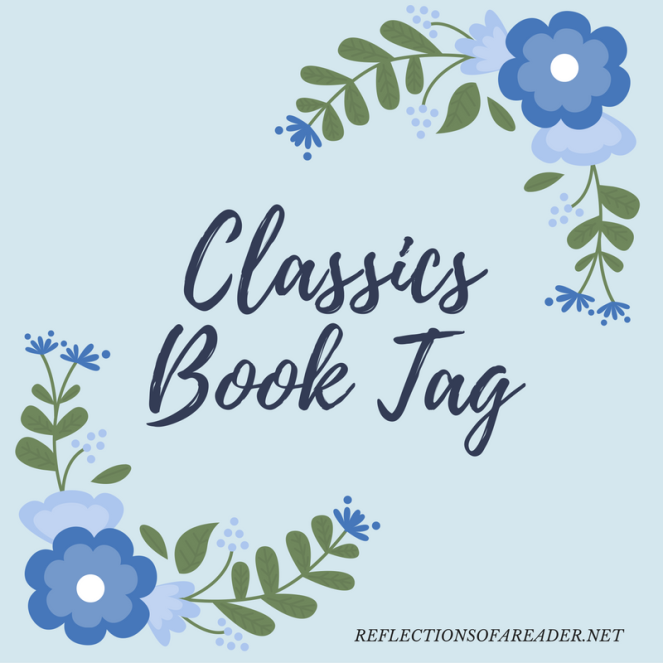 Hello lovely readers! Today I’m here with a type of blog post that’s a bit new for me – a book tag. I know that book tags are extremely popular and extremely common in the book blogging world, but I personally have never done one here on Reflections of a Reader. There’s a first time for everything, however, and when the lovely Lauren from Where There’s Ink There’s Paper tagged me to do the Classics Book Tag I simply knew I had to do it. You can find the link to Lauren’s post here, and you can find the link to the original post here if you’re interested. 🙂

Believe it or not, I can’t think of a classic I really didn’t like. I read classics because I’m interested in them, not because I feel like I should read them, which means all of the classics I’ve read so far in my life are books I’ve really enjoyed.

If I have to give an answer for this question, I would probably have to choose Romeo and Juliet by William Shakespeare. I’m a big fan of the Bard and the writing in this play is beautiful, however the characters of Romeo and Juliet aggravate me to no end and I find the rapid progression of the story line a tad unrealistic.

I’m completely convinced that I was born in the wrong time period – I really missed my calling by not being alive during the first half of the twentieth century – and so my favorite classics and historical fiction novels are usually set sometime between 1900 and 1950 – The Great Gatsby by F. Scott Fitzgerald, A Moveable Feast by Ernest Hemingway, The Paris Wife by Paula McLain, Z by Therese Anne Fowler, And Then There Were None by Agatha Christie, Revolutionary Road by Richard Yates, and so on. I also love reading English classics set in the eighteenth and nineteenth centuries, a range that covers authors such as Jane Austen, the Bronte sisters, Charles Dickens, Arthur Conan Doyle, and the like.

I’m not a huge fan of fairy-tales, however I remember absolutely loving Hans Christian Anderson when I was younger so I would have to choose one of his stories, something like The Princess and the Pea.

Question #4: What is the most embarrassing classic you haven’t read yet?

This is an easy one for me – The Picture of Dorian Gray by Oscar Wilde. I’m a massive fan of Oscar Wilde, and while I’ve delved into his plays and short stories I still have not read his novel. Why? The world may never know.

Question #5: Top 5 classics you would like to read soon.

Question #6: Favorite modern book/series based on a classic.

I don’t read too many retellings of classic novels, but I do really love Bridget Jones’s Diary by Helen Fielding, which is, as many of you will already know, a modern take on Jane Austen’s beloved Pride and Prejudice. Written in the form of a diary, readers follow the daily shenanigans of the hapless twenty-something Bridget Jones, from her problems at work to blunders in her love life. This book is absolutely hilarious and such a quick read, plus the movie adaptation is wonderful (Colin Firth is in it, people, what else do you need?!).

Question #7: Favorite movie/TV-series based on a classic.

Oh my gosh, there are so many! The 1995 mini-series of Pride and Prejudice with Colin Firth, the 2009 mini-series of Emma starring Romola Garai and Jonny Lee Miller, the TV-series Sherlock with Benedict Cumberbatch, the TV-series of War and Peace that was shown this year with James Norton and Lily James, the film version of Gone with the Wind, and the 2011 film of Jane Eyre starring Mia Wasikowska and Michael Fassbender. I’m probably forgetting a load, but these are just the ones I can think of off the top of my head.

For me this definitely has to be the 2005 film version of Pride and Prejudice starring Keira Knightley and Matthew Macfadyen. I don’t know what it is about this film, but I can’t stand it. I have never been able to watch it all the way through and I never will, it just like a bad parody of the 1995 mini-series.

Question #9: Favorite edition(s) you’d like to collect more classics from.

Question #10: An underhyped classic you’d recommend to everyone.

For this question I’ve decided to choose Love Labour’s Lost by William Shakespeare. I hardly ever hear this play talked about, and it’s one of my absolute favorites from Shakespeare. There’s loads of quick-witted, clever humor and an abundance of strong female characters – what could be better?

So that’s it for the Classics Book Tag! I’d like to tag a couple of other lovely book bloggers who I think will really enjoy this tag:

What is your favorite classic? Let me know down in the comments. 🙂

17 thoughts on “The Classics Book Tag!”