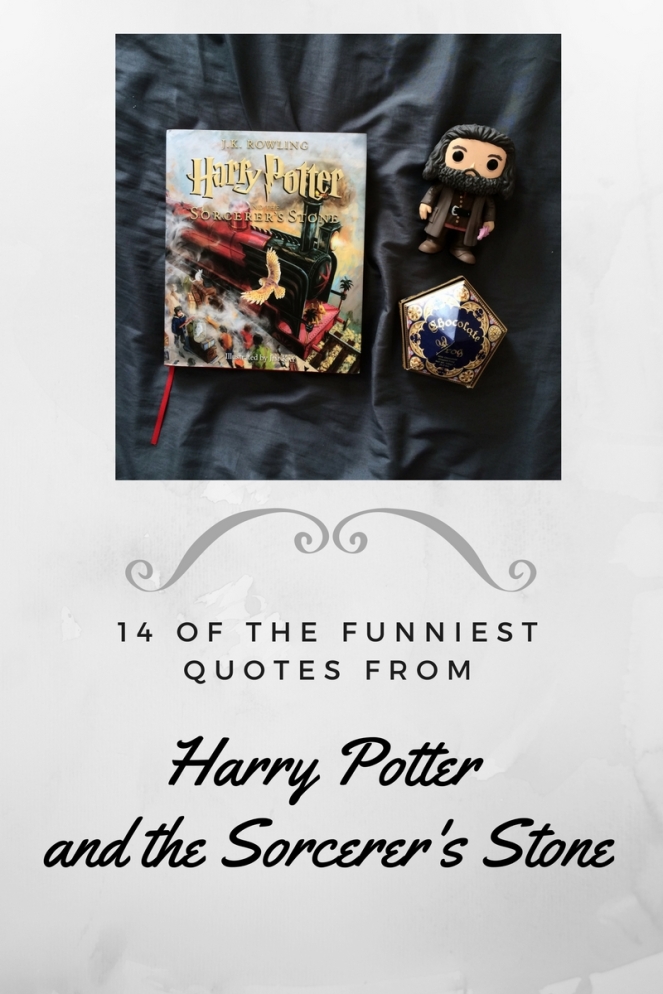 After finishing Harry Potter and the Cursed Child (which you can read my review of here, if you’re interested), I was overwhelmed with the desire to reread the original seven books in the Harry Potter series. I haven’t read the first few books in the series since I was quite young and, while I’ve always loved all of the Harry Potter books, I think I forgot just how funny they are. That’s why today I thought I’d share with you fourteen of my favorite quotes from Harry Potter and the Sorcerer’s Stone. I found these hilarious, and I hope you get a good laugh out of them as well. 🙂There’s this quote from the first chapter that perfectly sums up the intolerant character of Vernon Dursley:

“Mr. Dursley stood rooted to the spot. He had been hugged by a complete stranger. He also thought he had been called a Muggle, whatever that was. He was rattled. He hurried to his car and set off home hoping he was imagining things, which he had never hoped before, because he didn’t approve of imagination.”

And Harry’s spot on description of Dudley:

I’m pretty sure they don’t want to be like you anyways, Dursleys:

“‘See,’ he explained to Aunt Petunia through a mouthful of nails, ‘ if they can’t deliver them they’ll just give up.’

‘Oh, these people’s minds work in strange ways, Petunia, they’re not like you and me,’ said Uncle Vernon, trying to knock in a nail with the piece of fruit cake Aunt Petunia had just brought him.”

There’s this quote from Hagrid about his failed attempts to turn Dudley into a pig:

“‘Shouldn’ta lost me temper,’ he said ruefully, ‘but it didn’t work anyway. Meant to turn him into a pig, but I suppose he was so much like a pig anyway there wasn’t much left ter do.'”

Then there’s this prime example of Fred and George teasing their mum:

“‘Fred, you next,’ the plump woman said.

And Fred and George teasing Percy…

“‘Oh, are you a Prefect, Percy?’ said one of the twins, with an air of great surprise. ‘You should have said something, we had no idea.’

‘Hang on, I think I remember him saying something about it,’ said the other twin. ‘Once -‘

And Fred and George teasing Ron about the Sorting ceremony…

“‘So we’ve just got to try on the hat!’ Ron whispered to Harry. ‘I’ll kill Fred, he was going on about wrestling a troll.'”

Dumbledore’s words of wisdom for the beginning of the school year:

“‘Welcome!’ he said. ‘Welcome to a new year at Hogwarts! Before we begin our banquet, I would like to say a few words. And here they are: Nitwit! Blubber! Oddment! Tweak! Thank you!'”

This example of Peeves messing with Filch:

‘Don’t mess me about, Peeves, now where did they go?’

‘Shan’t say nothing if you don’t say please,’ said Peeves in his annoying sing-song voice.

‘NOTHING! Ha haaa! Told you I wouldn’t say nothing if you didn’t say please! Ha ha! Haaaaaa!'”

And this moment from the Gryffindor vs. Slytherin Quidditch match when Lee Jordan is all of us being outraged by the underhand tactics of the Slytherins:

“Lee Jordan was finding it difficult not to take sides.

‘So, after that obvious and disgusting bit of cheating -‘

‘I mean, after that open and revolting foul -‘

‘All right, all right. Flint nearly kills the Gryffindor seeker, which could happen to anyone, I’m sure…'”

This moment when Dumbledore is the complete opposite of any book lover at Christmas ever:

“‘What do you see when you look in the Mirror?’

‘I? I see myself holding a pair of thick, woollen socks.’

‘One can never have enough socks,’ said Dumbledore. ‘Another Christmas has come and gone and I didn’t get a single pair. People will insist on giving me books.'”

And then there’s Hagrid and his dragon-fetish…

When Hermione completely crumbles under pressure:

“‘Devil’s Snare, Devil’s Snare…. What did Professor Sprout say? It likes the dark and the damp -‘

‘So light a fire!’ Harry choked.

‘Yes – of course – but there’s no wood!’ Hermione cried, writing her hands.

“‘Ah! Bertie Bott’s Every-Flavour Beans! I was unfortunate enough in my youth to come across a vomit-flavoured one, and since then I’m afraid I’ve rather lost my liking for them – but I think I’ll be safe with a nice toffee, don’t you?’

He smiled and popped the golden-brown bean into his mouth. Then he choked and said, ‘Alas! Earwax!'”

What are some of your favorite Harry Potter quotes? Would you like to see more quote posts like this in the future? Let me know down in the comments. 🙂